Monster like to rate sekwels on what me call de Sliding Celebrity Sibling Scale.  It start at Clint Howard and go all de way up to Mark Wahlberg.  Given how much me enjoy first Iron Man, me expect Iron Man 2 to be a real Stephen Baldwin.  But it surpass monster’s expektations and, initially, me consider it a solid Casey Affleck.  But, in preparing dis review and after further reflektion, me have to downgrade it to a Randy Quaid.

Iron Man 2 pick up not long after first Iron Man end.  U.S. government mad at Tony Stark because dey want to militarize his tech.  Tony refuse and, instead, he do what regular folk do to blow off steam: drink, sleep around, and race in de Monaco Grand Prix.

Maybe he should stick to Nascar. 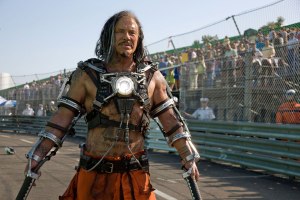 Who else would you get to play part of brilliant scientist?

Russian sent away to prison but later busted out by Tony’s business rival, Justin Hammer, who evidently have desperate need to fill sociopathic affirmative action position within his company.  While Justin leave Russian free hand on his technologies…

Tony continue love-annoy relationship with Pepper Potts who he appoint new Stark Industries CEO.  Sekwel offer some great scenes between dese two and also his chauffeur/bodyguard/director Happy Hogan.  All in all, dialogue in dis movie be as sharp as a super electric whip.  Dat’s pretty sharp!

In another interesting subplot dat go absolutely nowhere, we learn Tony suffering from blood toxicity caused be his own suit.  Being Iron Man is killing him.  Literally!  It be a great dilemma dat, sadly, given short shrift and too easily addressed before movie’s end. 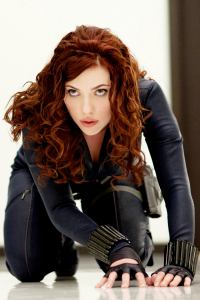 Another subplot involve Natahsa Romanoff (aka Black Widow) who be working undercover at Stark Industries to assess Tony.  Her presence in dis movie, along wit a couple of scenes involving Nick Fury of S.H.I.E.L.D., do nothing to advance de story and only serve to set up future Avengers movie.  And give fanboys boners.

At one point, Tony get so drunk he end up facing off against his best buddy, Rhodey.  In full battle gear!  It be one of de most ridikulous sekwences in dis movie and feel like an attempt to address a producer’s skript note: “De second act be kind of dragging.  We need to insert some aktion.  Who cares if it not make any sense.”

Because he show poor judgement (if dat what you call almost killing a bunch of innocent bystanders) Tony put under house arrest. Meanwhile, Justin Hammer make big demonstration  showing off his new line of iron suits to be purchased by U.S. military – and modeled by Rhodey.

BUT Russian somehow (Hey, me already mention he be a genius) hack into iron suits and sic dem on Iron Man.