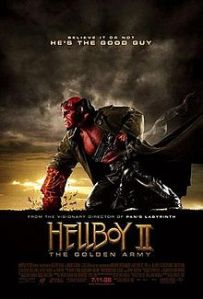 Monster pleasantly surprised by first Hellboy so, of course, me expeckt less of de same from de sekwel becuz, after all, it be a sewkwel. Remember Hangover II?  Blues Brothers 2000?  Citizen Kane II: The Quickening?  But Hellboy II: The Golden Army out-surprise de first Hellboy.  It a movie wit even more heart, even more humor, even more spekatcular visual effekts – but also, at times, even more problems.

But he not sulk for long.  Mebbe only a few centuries.  And when a piece of de crown show up at auktion, he also show up to claim it – and sic creepy little flying “tooth fairy” creatures on everyone.  He den pay his dad, de King, a visit and kill him to get second piece of crown.  But his twin sister, Princess Nuala, run away wit final piece, spoiling brother’s plans. 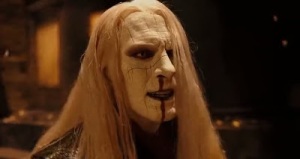 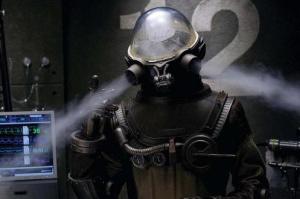 Johann Krauas be a steampunk German ectoplasmic medium wit attitude.  He be annoying at first but, over course of movie, monster really warm up to him.  In fakt, entire BPRD team – Hellboy, Liz, Abe, Johann, even Tom Manning (played by Jeffrey Tamborine) – be unique, interesting, very likable charakters.  So monster perplexed dat main villain, Prince Nuada, be so dull.  Oh, he very interesting to look at and his fight scenes be great but, at end of de day, he not be partikularly sympathetic or despicable.  He just a little bland.

BPRD visit Troll City where dey find Princess Nuala and bring her back to headquarters.  She flirt wit Abe Sapien who fall head over flippers in love wit her.  Despite being covered in prostetiks, aktor Doug Jones practically steal de movie, delivering terrifik performance as Abe (who could be love child of Fraiser’s Niles Crane and Creature from de Black Lagoon).  In one of movie’s highpoints, Abe and Hellboy bond, booze and brood over deir respektive relationships.  BUT fun time interrupted by Prince Nuada who track down his sister.  Becuz dey be twins, he able to locate her and comes close to finding final piece of magik crown hidden in a book –

Broken spear point stuck in Hellboy.  He dying!  Liz, Hellboy and Abe – wit surprize help from Johann – steal plane and go get help.  Dey end up coming across monster who happen to want de spear point and happen to know someone who can get it out (yeah, yeah, me know, me know.  It be a stretch).  Our heroes pay visit to second cousin of creature from Pan’s Labyrinth –

He remove spear point from Hellboy but warn dat, one day, Hellboy will destroy Earth.  But dat’s a story for another time…

Hellboy, Liz, Abe, and Johann track down Prince Nuada and sis.  Abe give up final piece of crown which allow Nuada to awaken Golden Army. Big fight ensue!  Our heroes about to get deir asses kicked when Hellboy challenge Nuada for de crown.  Dey duel.  Hellboy win!  Nuada a sore loser and about to get all stabby-stabby on Hellboy when Princess Nuala stab herself, mortally wounding both her and her brother.  Becuz dat’s what happens when you’re a twin.

Our heroes eskape.  Liz inform Hellboy dat he going to be a dad – of twins!  And Johann Krauss deliver best line of entire movie: