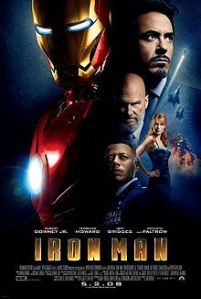 Movie open on rich industrialist playboy Tony Stark, a guy who be seeing more girly action den Kermit during his Muppet Show days! But during grand tour of Afghanistan, his military convoy attacked (see, dis why Monster prefer all expenses paid cruises).  Tony taken prisoner by terrorists.  Injured in attack, his cave-prison bunkmate build him mini arc reaktor to keep shrapnel from entering his heart (So DAT what arc reaktor does!  Me got one two Christmas’s ago and be using it to power my gecko aquarium).  Tony also forced to build terrorists a weapon like one designed by his company, Stark Industries.  And, after dat, who knows?  Mebbe a sous vide machine?

Hey!  Dis not in pamphlet me got from Tourism Afghanistan!

But tricky Tony fool terrorists.  Instead, he make pimped out suit of armor.  He kick ass and fly away, crash, but end up getting reskued by army buddy.

Back home, Tony be conflikted.  After finding out terrorists be using his weapons, he shut down weapons division of Stark Industries.  Dis not sit well wit his partner, Obladi (Oblada Life Goes On Brah La La La How Life Goes On) Stane.  But Tony not seem to mind.  He too busy working on new and improved Iron Man armor like one he designed and built in Afghanistan.  He test it, take it for a joyride, kick more terrorist ass, and, in one thrillling sekwence, outfly a couple of spiteful fighter jets.  He also find time to flirt wit his cute assistant, Pepper Pots, in a relationship reminiscent of classik screwball comedies of de 40′s.

It turn out he not de only one working on a suit as terrorists be trying to reverse-engineer his first prototype.  But terrorists de least of Tony’s problems.  It turn out Obladi (Oblada Life Goes On…, etc.) in league wit terrorists all along.  He steal plans for prototype from dem, den steal mini arc reaktor from Tony’s chest.

It all lead to terrifik, extended VFX showdown dat also reminiscent of classik screwball comedies of de 40′s.  Sort of like Adam’s Rib except, instead of lawyers arguing a case, Tracy and Hepburn be business partners fistfighting in high-tech suits of armor.

Verdikt: A perfekt blend of aktion, humor and great dialogue.  A skript dat aktually fun and make sense!  No doubt screenwriters will be rewarded by not getting to write sekwel!