Benign and inoffensive.  Dat pretty much sum up dis movie.  On de one hand, it not sink to craptastic lows of first FF movie; on de other hand, it never quite reach de lofty heights of mediocrity either.

Reed Richards and Sue Storm be in love and want to get married. Meanwhile, silver alien on surfboard fly around world creating weather disturbances.  Dis pretty much sum up first 60 minutes of movie’s 90 minute running time.

Most boring super celebrity couple ever!

Instead of quietly tying de knot in publik, Reed and Sue opt for big publik wedding – and den complain when dey keep getting harassed by paparazzi.  Boo hoo hoo.  Dey also end up getting upstaged by silver alien on surfboard who happen to fly by during ceremony.  Johnny flame on and give chase, but get choked out for his troubles.

When he return to team, we diskover he suddenly possess strange ability.  Every time he touch someone, he end up swapping powers wit dem!

Monster realize dis a superhero movie and rules of general logik may not apply, but me still feel movie should adhere to internal logik.  What possible reason dere be for Johnny to acquire dis strange power?  Silver Surfer never display dis ability.  So why dis complikation introduced? Two reasons.  1. So dat movie can include scene where Johnny swap powers wit Sue who end up burning off her clothes and end up – ho ho ho – naked.  Again!  2. So dat we have ready-made, dramatikally unsatisfying solution to problem at end of film.

Silver Surfer a real annoyance.  He keep flying around de world causing trouble.  FF try to stop him but keep getting in each other’s way.

Finally, Reed realize dat surfboard is source of Silver Surfer’s power. How he figure dis out?  Come on!  De guy’s name be Silver Surfer!  So Reed create plan to use tacky-on pulse to separate Silver from surfboard.  He be helped, sort of, by Doctor Doom who, conveniently, be cured of scarring and get free pass from “army”. 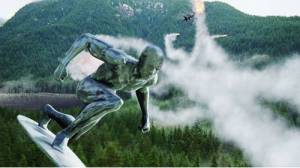 Reed succeed!  Silver captured.  His board locked safely away.  Until Dr. Doom ask army if he can take a look at it.  Pretty pleaze.  Army say okay and – in movie’s most unshocking twist – it turn out Dr. Doom be a bad guy after all.  Come on!  De guy’s name be Doctor Doom!

He hop on board and surf away.  FF give chase in flying car-thing Reed just happen to finish building off-screen.

Monster just one to take a moment to say idea of alien riding around on a cosmic surfboard must have been really great back in de 60’s when everybody doing LSD.  Nowadays, not so cool, dude.

Reed get bright idea to give Johnny all deir powers so he can fight Surfer Doom.  How he know dis even possible monster not sure but movie near its merciful end so me not complaining.  Much.  Sue sacrifice her life to save Silver.  Johnny, wit all four powers, fight Doom. It back and forth until –

Ben Grimm (aka Thing) climb up onto crane, swing it around and knock Doom into de drink.  Really.  DAT was de plan?!

Fantastic Four in One.

Wind pick up.  Uh oh!  It turn out Silver Surfer be a herald for Galactus de Planet Eater and Earth be doomed.  But Silver Surfer have change of heart and, after curing Sue of death (Oh, he can do dat?  Okay.), he fly up into funnel in de sky and stop Galactus from eating Earth.  How exaktly?  Why he do dis when he already said he serving Galactus to save his own family?  Why do Johnny’s weird body swapping powers suddenly disappear?  Shut de fudge up!  You ask too many qwestions. Just sit back and  give  makers of dis movie a free pass so dey can cash deir unearned paychecks.

Everybody hug.  Reed and Sue get married in Japan.  Johnny’s girlfriend almost catch bouquet but he end up incinerating it becuz he a playah!  And she, by extension, a tramp.  Tee hee.