Who knows what evil lurk in de hearts of men?  De Shadow knows!

How he know?  Search monster.  Me having hard enough time trying to make sense of dis movie.

De Shadow remind monster of De Rocketeer.  Both great-looking period movies with terrifik costumes and set dezign.  But while Rocketeer skript flat and simple , dis skript a little too out dere for it’s own good.  It full of weird magic,  mind control and mind reading, esoterik concepts dat don’t seem to follow any internal logik and just make whole movie feel so unreal it very diffikult to connect wit charakters on any level.

Movie start in China where audience find Jack from Turdy Rock doing great imitation of Trent Reznor.  He a very bad man.  But he get kidnapped by monk, shamed by crazy magik flying dagger, and told he going to be good now.  Seven years later, we in New York where some gangsters about to kill a witness.  Suddenly, a disembodied voice stops dem.  A shadow – literally!  A shadow! – appear and disappear, scare away gangster and save witness.  Turn out dis shadow is…DE SHADOW!  Yeah.  Not to be confused wit other lesser Shadows. 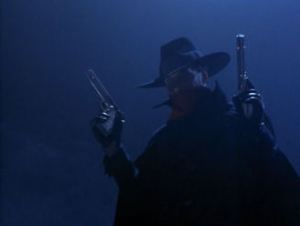 BUT it turn out De Shadow have alter-ego.  By night he be De Shadow but, by day, he a wealthy playboy…just like Bruce Wayne.  Hmmm. 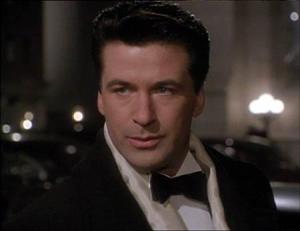 By night, he be de Shadow, but by day he be millionaire playboy Bruce Way-, uh, monster mean Lamont Cranston.

And he live in a city dat look an awful lot like Gotham City.  Becuz it is! Aka New York in de 30′s. 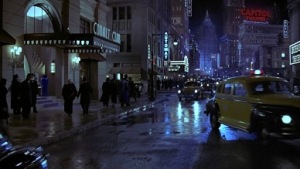 The streets of Gotham. No, not DAT Gotham. New York City.

His real name Lamont Cranston and not only he be rich and handsum, but he have power of mind control.  One night, at de Cobalt Club, he spot a sexy woman at de next table.  He charm her.  But it turn out…she have powers too.  She can read minds!!!

She smart and pretty. Oh, and she reads minds. Did I mention dat?

Why dis woman can read minds?  Did some other monk give her dese powers?  Is dis really necessary? 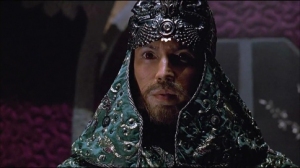 And he have powers of mind control too!  Wow!  Only ting dis movie missing be magical sorting hat!

Mindreading love interest, Margo, have father/scientist (and, monster suspekt, part-time wizard) who work for War Department.  Khan Jr. use his crazy mind control powers to kidnap father and make him build…pre-atomic bomb atomic bomb!  But Lamont figure dis out by analyzing coin Khan Jr. use to pay him for glass of bourbon.

Whoa, waitaminute.  Why Khan Jr. paying for bourbon wit special coin? Why he so stoopid?

Scientist-dad’s boss, Tim Curry, lock Shadow in chamber and fill it wit water.  Lamont have to use his mind powers to call Margo to unlock door and save him.  De Shadow realize Khan Jr. going to blow up New York.  Have to stop him! 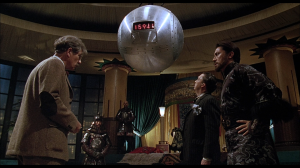 He track him down.  Tim Curry try to shoot at shadow on de wall, but de real Shadow not hurt.  Which be kind of strange since, in earlier scene, Shadow gets pinned to wall wit crossbow bolts.  Why crossbow bolts effekt him but bullets don’t? 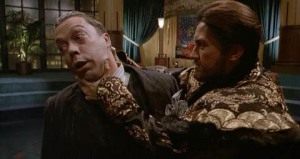 Meanwhile, Shadow and Khan Jr. still fighting.  Crazy flying magik dagger make another appearance.  It being controlled by Khan Jr. but Shadow use his powerz and gain control of it and kill Khan Jr.  Which leave monster scratching his head.  If Shadow able to take control of dagger, dat mean HIS mind control stronger den Khan Jr.’s.  BUT earlier in movie, Shadow not able to control Margo’s mind but Khan Jr. able to do so no problem.  Dis not make sense.  Why?